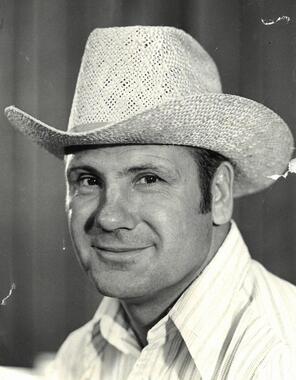 Back to George's story

Graveside services for George Edward Hinson, 85, of Grandview, Texas will be conducted at 11 a.m. Friday, November 22, 2019 at Grandview Cemetery with Mr. Buddy Fry officiating. Visitation for family and friends will be held from 6 - 8 p.m. Thursday, November 21, 2019 at Rosser Funeral Home in Cleburne.
George Hinson passed from this earth on Sunday, November 17, 2019 at the Grandview Nursing Home after a long illness.
A lifelong resident of Grandview, George was born in Alvarado, Texas, the son of Floyd B. and Clara (Davis) Hinson.
He attended Grandview High School and was an outstanding athlete, known for his great athletic abilities, in football and track. He met the love of his life, Mary Sue Roden, while in high school.
They were married on June 28, 1953.
Dad had a passion for the outdoors, especially horses and spent many hours riding, training, and teaching his children and grandchildren to ride.
Dad, was also known and loved by many, each of you who knew him have your own stories and memories of him to keep and cherish.
We used to hear a lot of stories told about "Big George", a big man who had a big heart.
You will be greatly missed Dad, until we meet again. We love you.
George leaves his wife of 66 years, Mary Sue (Roden) Hinson, four daughters, Marshi Young (Bruce), Amy Moldenhauer (David), Kathy Spann (Roger), Pat Gatlin (Bill); two sons, Clint Hinson (Ame) and Vincent Hinson.
"Papa" also leaves a long legacy of 18 grandchildren, 26 great grandchildren and 4 great-great grandchildren.
He is also survived by brothers, Floy Hinson (Marty), Jim Hinson, Earl Hinson (Betty); one sister- Katherine Ramey (Jessie); sisters-n-law and brother-n-law, Brenda and Charles Edwards , and Nadine Roden; numerous nieces and nephews; and many friends who have known him his whole life.
In lieu of flowers, donations may be made to the Grandview Nursing Home.
You may view the obituary online at www.rosserfuneralhome.net.
Published on November 18, 2019
To plant a tree in memory of George Edward Hinson, please visit Tribute Store.

Plant a tree in memory
of George

A place to share condolences and memories.
The guestbook expires on February 16, 2020.