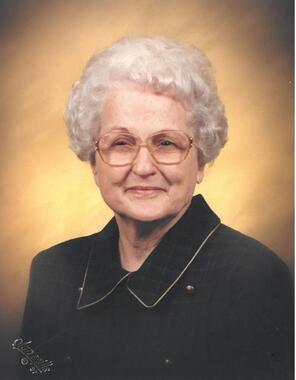 Funeral services for Fleeta Imajean Pickett Bass of Cleburne will be conducted at 10:00 A.M., Saturday, December 7, 2019 in the Rosser Funeral Home Chapel in Cleburne. Dr. Robert Herzig will officiate.
Family visitation will be held at Rosser Funeral Home following the service. Private burial will be at Rosehill Cemetery.

Fleeta Bass, 97, passed away on Thursday, December 5, 2019 in Cleburne, on what would have been her 76th wedding anniversary.

She was born July 18, 1922 in Hazel, Oklahoma to Dee Witt Pickett and Bennie (Rupe) Pickett, the youngest of seven children. Fleeta married Joseph Thelbert Bass in Maysville, Oklahoma on December 5, 1941.

Fleeta and J.T. made Cleburne their home in 1955. She has been an active member of First United Methodist Church (previously Main Street Methodist) serving as a District Representative, Board Member, Alter Guild and Wesley Class. Fleeta was active in King's Daughters and Beta Sigma Phi while making life-long friends. She also served as First Lady of Cleburne while J.T. was Mayor.

"Miss Fleeta" as she was called, loved God, her church, her family and her many friends. She was always willing to give of herself to others. She also made the best cherry pie in town. Fleeta was preceded in death by her parents; her husband of 57 years, J.T. Bass and her son, B.M. Bass.

In lieu of flowers, the family requests memorials be made to: First United Methodist Church, 1300 W. Westhill Dr., Cleburne, Texas 76033

You may view the obituary online at www.rosserfuneralhome.net
Published on December 5, 2019
To plant a tree in memory of Fleeta Imajean Pickett Bass, please visit Tribute Store.

Plant a tree in memory
of Fleeta

A place to share condolences and memories.
The guestbook expires on March 04, 2020.