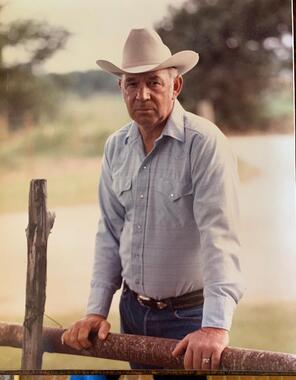 Back to Carl's story

Service for Carl S. McLaughlin, 87, of Godley, will be conducted at 10:00 A.M. Wednesday January 08, 2020 in the Crosier-Pearson Cleburne Chapel. Pastor Randy Tucker will officiate. Burial will be in Godley Cemetery. Pallbearers will be Kirk Savage, Clayton Richardson, Patrick Richardson, Buster Sowell, David Hanna and Joe Pat McNally. Honorary pallbearers will be the Crew at Godley Coffee Shop and the Fish Fry Buddies. Visitation will be 6:00 - 8:00 P.M. Tuesday

Carl S. McLaughlin passed away on Sunday, January 05, 2020 in Huguley nursing home in Burleson. He was born June 04, 1932 in Bono to Homer and Lois (Jones) McLaughlin. He attended Godley High School graduating in 1951 and served in the US Army during the Korean Conflict- 1952-1954. He was in construction then operated a dairy farm for 26 years. He loved fishing, especially striper fishing and travelled many states pursing his hobby. On November 16, 1956, he eloped with June Abbott to Weatherford; they celebrated 63 years of marriage. "Mac" as most everyone called him, had a contagious spirit and lived life to the fullest. He loved his family dearly. He was a hard worker, loved his cows, farming, fishing and playing poker. After suffering a massive stroke 7 years ago, his family surrounded him with love and devotion.

Carl is survived by his wife June of Godley; one daughter Patti and husband David of Burleson; 2 sons Steve and Kevin of Godley; brother Cecil McLaughlin;2 grandsons Clayton and wife Jessica Richardson and Patrick and wife Kate Richardson of Benbrook; granddaughter Emma of Godley; special little ones are Colt, Hagen, Hazely, Harmony, Corbyn and Ellie. He was preceded in death by his parents; 2 sisters Louise and Lucille; 3 brothers J.W. (Pete), Billy and Fred.

Thanks to staff of Huguley Nursing Home for their dedicated care.

Carl loved parties-the bigger the better- and he lived life to the fullest. He had friends and seldom met a stranger.
Published on January 6, 2020
To send flowers to the family of Carl S. McLaughlin, please visit Tribute Store.

Send flowers
in memory of Carl

A place to share condolences and memories.
The guestbook expires on April 05, 2020.

Kerri Mclaughlin Clement
I’m so sorry to hear of Carl’s passing. Prayers for everyone for comfort
❤️ Kerri
Brenda Hall
So very sorry to hear of your loss,
we have known Carl and June all our life.
You both were very strong loved ones who truly loved
and cared.
God Bless, Comfort and Keep You All.
Joe and Brenda Jones Hall
HELEN W. WATTERS & SHERRY BANE

Jackie
I am so truly sorry to hear of Carl's passing! Heaven gained a wonderful, fun loving man! He always made me feel at home and will forever hold a place in my heart! May God be with all of you and wrap you in His loving arms with comfort and peace.
With much love,
Jackie (Greenfield) Applegate
View all