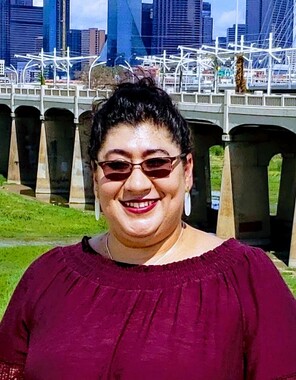 Back to Alma's story

A memorial service celebrating the life of Alma Guadalupe Villa-Perez, 47, of Cleburne, Texas will be held at 11 a.m. Thursday, January 23, 2020 at Calvary Baptist Church with the Rev. Charles Payne and the Rev. Dwight Phillips officiating.
There is no visitation scheduled.
Alma passed away Friday, January 17, 2020 in Fort Worth, Texas.
On August 24, 1972, the most beautiful soul Alma Guadalupe Villa-Perez was born in the small Mexican town of Muzquiz, Coahuila MX. She was the first born of Ricardo and Maria Villa. In August 1979, Ricardo and Maria brought their three kids, Alma, Jessie, and Richard to Monahans, TX with a fourth on the way. She attended school in Monahans, TX from first grade to twelfth and graduated in 1991. Shortly after, she got married and moved to Lubbock where in 1993, she had her first born, Luis Miguel McAdoo. Soon after in 1995 she then had her second child, Juan Isaac Vasquez.
In 2010, she decided to go the adoption route and she picked her fur baby, the one and only Tank.
When Alma wasn't being the first voice you heard when you needed help or studying for her dream career as a Spanish translator, she loved to spend her time working on her yard, diving into new mystery and suspense books, enjoying every bit of sun she could soak up whether she was by a lake or in her backyard watching Tank and Ruth rough house.
Every time she walked into a room with her smile painted with her signature red lipstick, everyone was running up to her to greet her. Everyone knew that she lived her life for God, her two boys, and beloved dog and she did everything she could to assure that they all lived the best lives they could and had the tools to thrive in life even after it was her time to be with The Lord.
Alma was always the voice of reason the person you run to when you were lost and needed guidance.
Alma was a 911 dispatcher for the City of Cleburne.
She is survived by her parents; Maria and Ricardo Villa; sons, Juan Isaac Vasquez and fiancée, Lizet Limon and Luis Miguel McAdoo; step-children, Anthony Vasquez, Haasan Walker and Shymia Walker; brother, Richard Villa and children, Annabell, Leannabell and Aliyahbell; sister, Jessie Villa and children, Alex Villa, Aidan Bustamantes and Caleb Rodriguez; brother, Peter Villa and wife, Sheryl and their children, Ariana Ybarra, Danielle Villa, Eva Villa and Laila Villa; brother, Juan David Villa and son, Carlos Villa; cousins, Rose McCandless, Billy McCandless, James McCandless and Kenny Villa; beloved dog, Tank Villa; and ex-husband, Dywayne Walker.
Published on January 21, 2020
To plant a tree in memory of Alma Guadalupe Villa, please visit Tribute Store.

Plant a tree in memory
of Alma

A place to share condolences and memories.
The guestbook expires on April 20, 2020.